A Look at Partnership Services

‘Partnership’ services have existed in some places in Israel and the United States for a while, but have only recently appeared in the UK.  They offer orthodox liturgy and traditional seating – genders are separated by a partition – but differ in that women, as well as men, lead parts of the prayers and read from the Torah.

Identifying and implementing halakhically-viable alterations to existing practice demands courage.  The orthodox world is innately change-averse, although innovation and creativity are possible within certain boundaries.  Yet since observance is defined and regulated by Jewish law, substantive modifications are only possible if they withstand halakhic scrutiny and conform to meta-halakhic (guiding philosophical) principles: supported by broad consensus among acknowledged halakhic authorities for the originator's credentials and methodology, as well as positive peer-review of his or her arguments.

From a halakhic perspective, a ‘partnership’ service includes several distinct practice-modifications, each of which deserves separate evaluation.  This is unrealistic in a short article, so I will focus only on the central and emblematic issues – women reading from the Torah on behalf of a mixed gathering and receiving aliyyot - being called to the Torah to make a blessing.

Halakhic validity for this innovation is claimed by the prominent expert in Jewish practice and Bar Ilan talmud professor, Rabbi Daniel Sperber, lately chancellor of a non-affiliated Canadian rabbinical school.  Although a few authors have written in support of Sperber, none shares his reputation and none has offered a significant alternative argument.

The essence of Sperber's reasoning follows.  Some early sources (notably a view in the Talmud with RaN's 14th-century gloss) opine that women may be counted among the seven called to the Torah on Shabbat.  Although this is cited in the 16th-century Shulhan Arukh, it is not known to have been practised; indeed, in the same talmudic passage, the anonymous 'sages' disallow the practice because of ‘dignity of the community'.  Sperber acknowledges that this has defined normative conduct from time immemorial.  Yet he notes that today, women study Torah to a high level and are as involved as men in many areas of religious and public life. Applying 'dignity of the community' to exclude women from aliyyot causes considerable distress, and, as such, can be overridden by the demands of 'human dignity', something highly prized by Jewish law.

While pastorally, Sperber's argument is appealing, it is halakhically flawed.  An exhaustive and widely-cited critique of Sperber was published in 2013 by Rabbis Aryeh and Dov Frimer.  Among their comprehensive technical rebuttals, the authors discuss Sperber's confusion of aliyyot with the Torah reading itself and his misappropriation of the notion of 'human dignity.’  Sperber's approach also evinces methodological irregularities.  Halakhah works on a system of antecedents - rulings built on an existing corpus of law and rules for its application.  As with all legal systems, it includes a wide range of views: some have been incorporated into the body of law; others, for whatever reason, have been excluded from it by the halakhic process.  One cannot simply disregard centuries of process and re-integrate marginalised opinions as the basis for practical innovation.  This equates to claiming that a long-disused judgement in 15th-century English property law could be validated as the basis for contemporary practice.  Yet this is precisely what Sperber does.  In fact, his approach suggests the untenable stance that any action not explicitly proscribed by halakhic sources is permitted.  Such claims undermine the very system within which Sperber purports to operate.

Halakhah is a complex, multi-chromatic system, so doubtless both Sperber and his detractors could muster additional arguments for their respective positions.  However, this is effectively irrelevant, given the total lack of support for women's aliyyot in a mixed service from significant halakhic authorities of any stripe.  In fact, there is a rare consensus within the orthodox rabbinate against this innovation.  In the USA, the senior halakhic authorities of Yeshiva University categorically dismiss its credibility.  Speaking to his rabbinate (February 2014, re-iterated February 2015), Chief Rabbi Ephraim Mirvis cited the Frimers' analysis in his unequivocal rejection of the halakhic validity of 'partnership' services.   In Israel, Rabbi Yehuda Herzl Henkin, a leading halakhist known for his sensitive and creative approach to contemporary women's issues, offers the most damning repudiation: 'women's aliyyot remain outside the consensus, and a congregation that institutes them is not Orthodox in name and will not long remain Orthodox in practice.'  As such, the practice lies beyond the parameters of halakhah, its implementation a new denominational reality; similar reasoning applies to women’s Torah reading in a mixed gathering.

For many, this will be a disappointing outcome and I remain acutely aware of the sense of disempowerment and frustration that some feel at the male-oriented leadership roles in orthodox services.  Notwithstanding these sensitivities, the cloak of authenticity provided by Professor Sperber's reputation and undeniable good intentions can only impede the genuine collaborative partnership required to generate halakhically-credible alternatives.  In a recent interview for the JC, Chief Rabbi Mirvis advocated developing Shul-based women’s prayer groups, something I consider a positive step, while acknowledging the need for other strategies.  But however we address this challenge, it is among the issues that will define the future of centrist orthodoxy.

A version of this article first appeared in the Jewish Chronicle

Endorsement from the Rabbinical Council of the United Synagogue

The position outlined above by Rabbi Dr Harvey Belovski regarding Partnership Services is unanimously supported by the Rabbinical Council of the United Synagogue.

In 1190, early in the reign of Richard I, fuelled by Crusade fervour and unpaid debts to Jewish money-lenders, anti-Jewish rioting broke out in York.  The local Jewish community took refuge in the wooden keep of the royal castle on the night of Shabbat HaGadol.  As matters worsened, Yom Tov of Joigny, a famous rabbi and their spiritual leader, advocated suicide rather than face the impending pogrom...

In this presentation, Rabbi Belovski will examine the background to the Clifford’s Tower massacre in Jewish, liturgical and historical sources, and consider its ramifications for English Jewry. 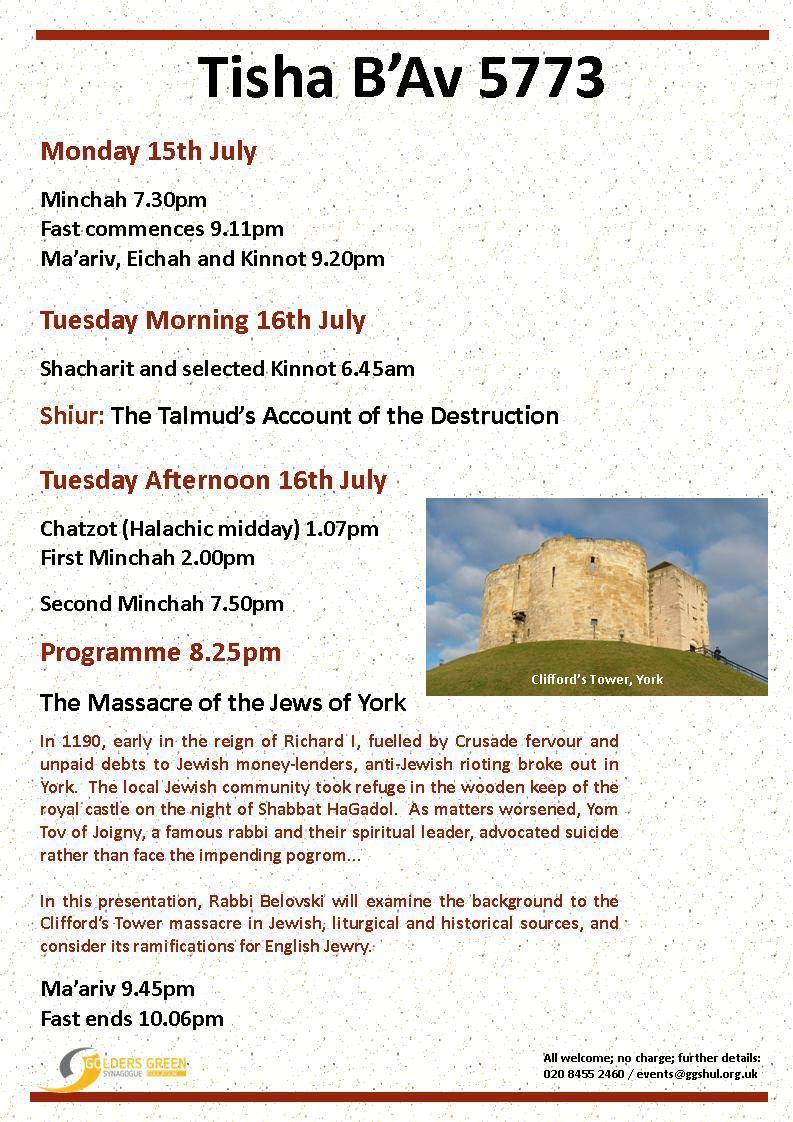